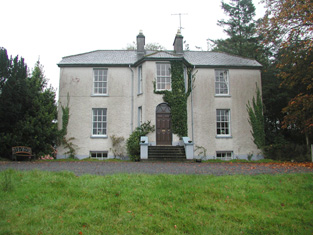 The Census of Ireland is conducted every 10 years and the Household Return form must be completed  by the Head of Family showing details of everyone who ‘slept or abode’ in the house on the night of the Census.  These completed forms provide a nice snapshot of each household by listing the occupants, relationship to the head of family, religious affiliation, education, age and sex, occupation, marital details, place of birth, and language skills. Other useful facts can also be gleaned from the completed form such as the number of children born alive and the number still living even if they are not present in the house on Census night.

The Household Return (Form A) completed by the Anderson family of resident at house #2 (Colgagh House) in Colgagh townland on the night of 2nd April 1911 contains a good deal of interesting information for the nine individuals recorded.

Mrs Margaret Anderson (aged 58) is widowed and living with her two sons Robert Basil (Bertie) aged 21 and Percival (Percy) aged 18.  Both young men are single.  Margaret has been married for 22 years and has given birth to three children. All three are alive but one is missing from the house that night – presumably living elsewhere.  All three give their religion as Wesleyan (Methodist). Robert was born in Co. Dublin and Percy in Co. Sligo.

It is clear that Margaret and her son Percy are running the family farm, following the death of her husband, as they both state their occupation as farmer.  For Percy this must have been a considerable burden on his young shoulders (the other Census Form B2 shows 18 outhouses on the farm).  His brother Robert is a teacher so obviously not involved with farming affairs.  However, the family does have the assistance of a farm servant called Hugh Gordon, aged 24, so two young men are available to help Margaret.

The Anderson family appears to have strong links with the north of Ireland. Margaret was born in Co. Antrim.  She has also hired a domestic servant, Isabella Jamison, aged 23 who also comes from Co. Antrim and is a Presbyterian. Hugh Gordon is from Co. Down.

The Andersons have four visitors staying in the house that particular night. All four are women – two widowed and two single.  The oldest is Eliza Megahy (aged 85), originally from Co Cavan, married for 58 years with seven children all of whom are still living. The other widow is Grace Sinclair (aged 40), originally from Co. Armagh, and married for 16 years with four children all of whom are still living.

The remaining visitors are two young single women. Irene Sinclair (aged 12), presumably the daughter of Grace, but born in Co. Antrim so it can be deduced that the Sinclairs are living in Antrim. Both are Presbyterian. The other young visitor is Sybil Cass (aged 17), born in Yorkshire, England.

Eliza Megahy and Sybil Cass give their religion as “Friend”, so they must be Quakers – The Society of Friends.

Finally, the farmhand Hugh Gordon states his religion as Salvation Army so the 9 people in the Anderson house on Census night represented four different religious affiliations.  The conversation must have been interesting.

Methodism was introduced to Sligo in 1757 and the founder of Methodism, Revd. John Wesley visited Sligo for the first time the following year and made around a dozen visits from 1758 up to 1789.  Wesley kept detailed diaries of his travels which were published from 1909 to 1916.  The extract for Thursday 26th June 1760 reads:

“I breakfasted at Mr John Anderson’s and dined at Mr Knox’s but two such families I have seldom seen.  They had feared God for many years, and served him in the best manner they knew. Nothing was wanting but that they should hear the more excellent way they embraced with all their heart.” 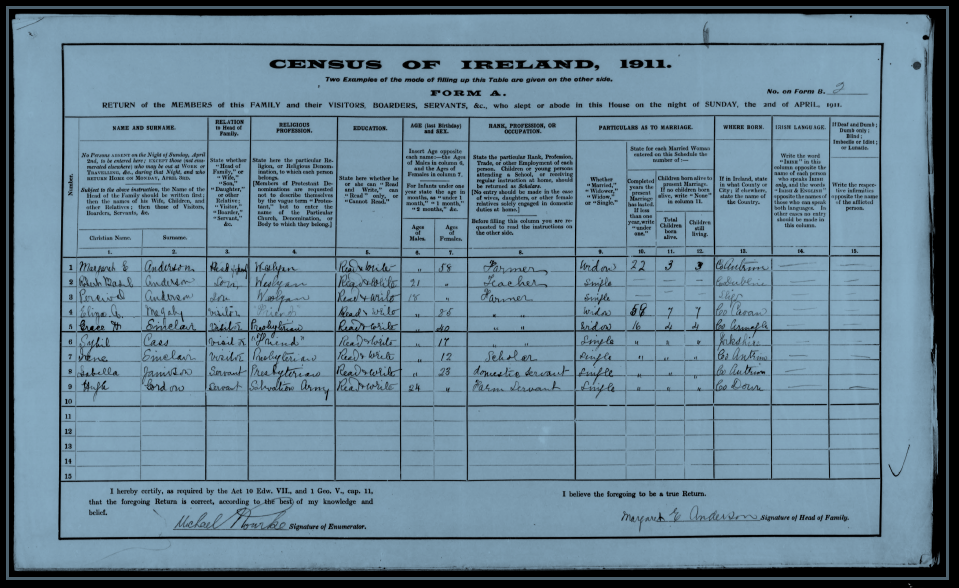